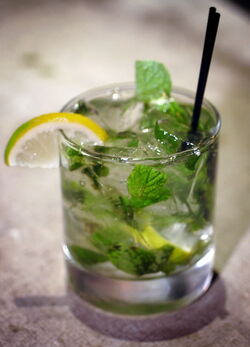 A splenda mojito is a drink that Deb used to drink a lot. She was also drinking it when she first met Grayson and accidentally some of it on his shirt. Yet when she became Jane, she did not drink it as much any more, asking at the sun bar for a regular mojito instead of the splenda mojito. Yet Stacy, who was determined to make her lose weight, told the bartender to use Vodka instead of rum and splenda instead of simple syrup to save Jane from gaining 250 calories. The drink isn't mentioned in the later episodes.

Retrieved from "https://dddiva.fandom.com/wiki/Splenda_mojito?oldid=4869"
Community content is available under CC-BY-SA unless otherwise noted.