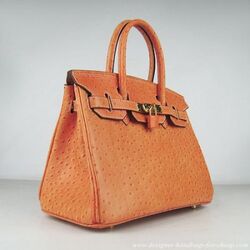 The Orange bag is a bag owned by Kim Kaswell who said to Jane and Teri that it was an ostrich leather Hermes bag which had a two-year wait on it but that she had managed to pull some strings to get it earlier. Later it is revealed by Jane, who is now inhabited by Deb, that it was a fake, since Hermes hadn't done ostrich in burnt orange since 2003 and that she recognized Frauda when she saw it ("Pilot").

Retrieved from "https://dddiva.fandom.com/wiki/Orange_bag?oldid=4738"
Community content is available under CC-BY-SA unless otherwise noted.