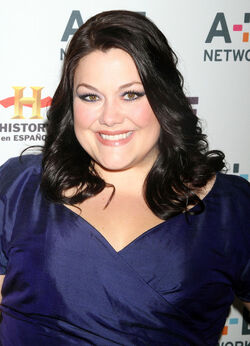 Brooke Elliott (born November 16, 1974) is an American actress who is most known for portraying the character Jane Bingum in the Lifetime series Drop Dead Diva.

Elliott was born in Fridley on November 16, 1974. In 1993 she graduated from Gabriel Richard Catholic High School in 1993. Then she went to Western Michigan University where she graduated in 1998 with a Bachelor of Fine Arts in Musical Theatre Performance.

Elliott has been trained as a singer. She has appeared in many Broadway shows like Beauty and the Beast, The Pirate Queen and Taboo and Wicked. She has also appeared in Law & Order: Trial by Jury where she played Denise Bell in the episode "Vigilante". The role of Jane has been her biggest role yet.

Community content is available under CC-BY-SA unless otherwise noted.
Advertisement